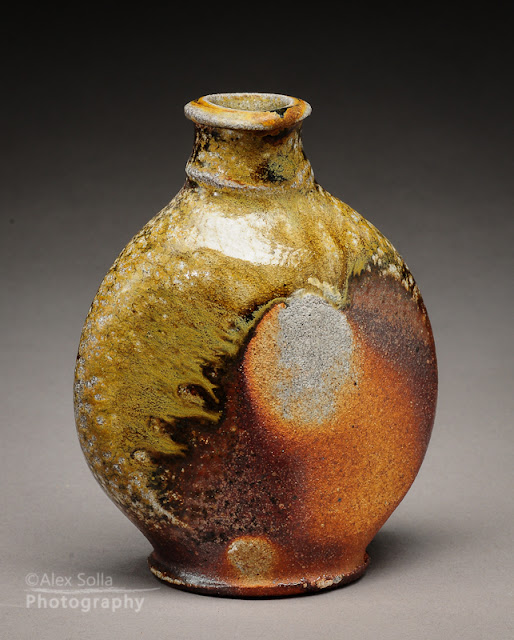 This paddled, ovoid bottle was made by Mark Lambert while he and I were in school at Utah State University. Mark now teaches in Minnesota. This little woodfired bottle has to be one of the most handled bottles in my collection. Everyone comments on how each side is so different. The extreme flashing and woodash deposit on one side... left the otherside almost a leather brown. Pretty wild considering how small this bottle is. My only regret was not picking out more pots from this firing of Mark's. 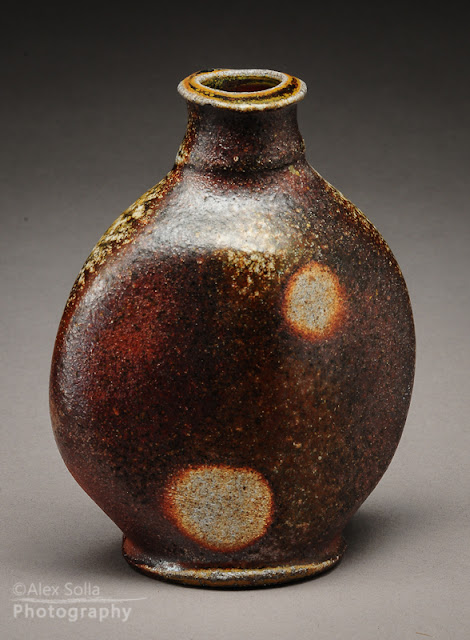 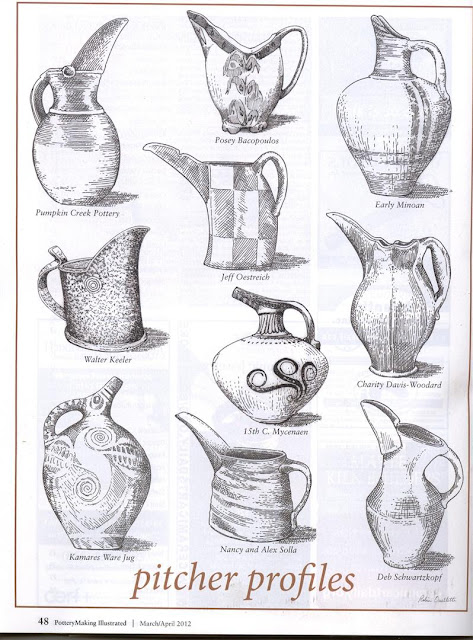 When the March/April 2012 issue of Pottery Making Illustrated arrived back in February, I was surprised. We hadn't had a subscription for probably at least three years. So I opened it up, assuming it was a promotional device, hoping I would come back. Got to the next-to-last page and saw these wonderful drawings of pitcher forms.  As I quickly scanned the page, I thought about how back when I first started making pitchers these were exactly the images I drew my inspiration from... well... except for the folks who weren't even making pots back then (youngsters, lol)....

And as I reached the bottom of the page, I saw our beaked pitcher from way back when. Probably made that blue pitcher back in 2008. I had planned to make a whole series of them. It just never happened. Between a series of rotten shows, health issues and then the coma, they were put on the back burner.

On one hand I am honored to have my pitcher show up in the magazine. On the other hand, no one called or wrote to ask my permission for inclusion in the magazine. Not sure how I feel about that. Seems like a pretty obvious issue of copyright infringement.... but at the same time, I am honored. Such a conundrum. How would you feel seeing your work show up in a magazine, without your foreknowledge?
Posted by Alex Solla at 9:00 AM 3 comments: 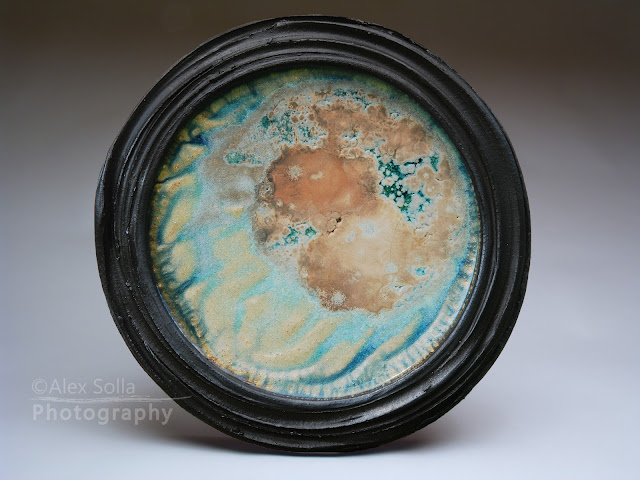 Today marks the first substantial rain we have seen since May. Over two months. Less than 1/4 of an inch of rain has fallen. Around here, that is unheard of. Still doesn't qualify as a drought. My yard has never been brown before. Even the weeds have given up the ghost. The clay soil that comprises the bulk of our soil has cracks wide enough to push a finger into. My yard has cracks. Where we should have grass... we have dust.

When I stare into this platter, I am reminded of how fragile our landscape is. Islands that have stood above the sea long enough to develop oral histories of their settling, are now in danger of subsiding under the rising seas. Parts of our own countryside, known for the most varied crops of apples anywhere, this year will produce virtually none. No apples. That means no cider. First world problem? Maybe. But I think it is really more of an indicator of what we have to expect for the near future.

Last year we were inundated with flooding from multiple hurricanes. Fall was torn apart with tornadoes. Winter brought us virtually no snow and warm temperatures. Grass was bright green in March this year, when it should have been buried under a foot of heavy snow. How long until our vernal island between these massive lakes dries up and crumbles? My guess is that the frakking for natural gas (scheduled to begin VERY soon in NY state) will accelerate that process and perhaps even be the tipping point. 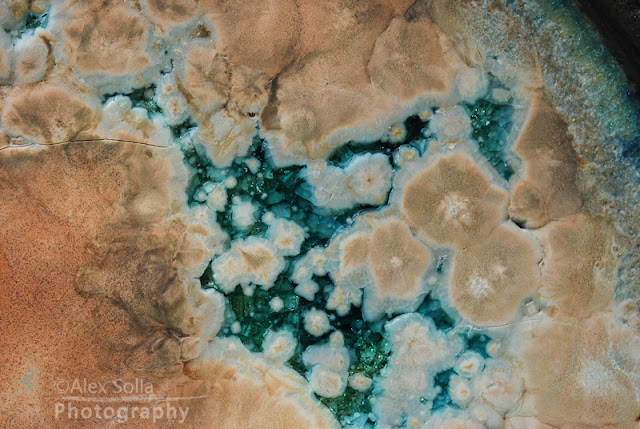 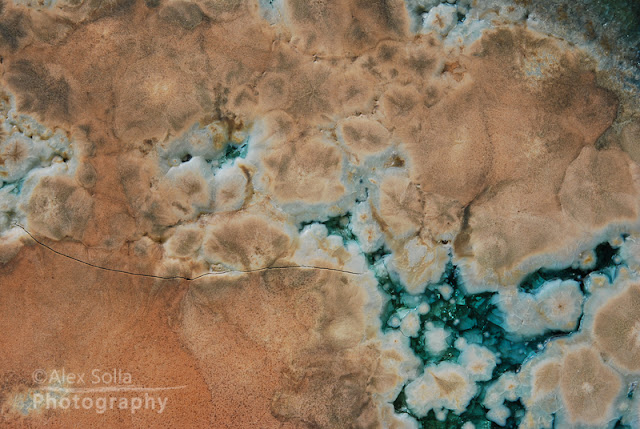 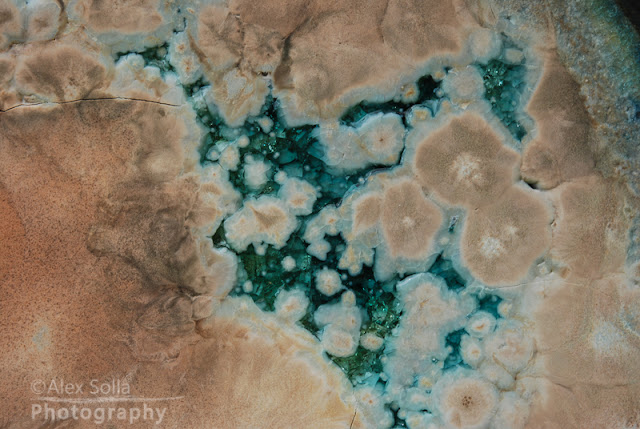 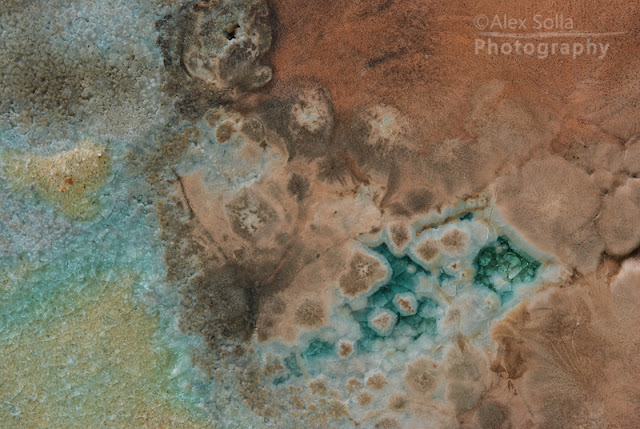 
The slow cooling factor of these platters was a direct result of the way they were fired. Imagine the inside of most kilns... a big giant empty chamber surrounded by bricks.... all the fire surrounding the ware on thick shelves. When fired this way, these platters would crack right down the center as they were heating due to the massive thermal shock (the difference between the temperature of the edge of the platter vs the center of the platter). If they were heated too fast, CRACK! Since there are no real windows in kilns, you couldn't tell which platters had cracked, and which had spilled their glaze contents all over the shelves. For the first few months of making these, the loss rates were almost 90%. The cleanup mess was insane.

To slow down the extreme heat, I decided to create a "muffle" for the ware. By building a baffle of bricks that surrounded the platters, the flame had to heat up the bricks (huge and heavy) before they could begin heating the platters. The upside to this was that cracking dropped dramatically. Unfortunately, by adding all of this excess brick, the firing times increased enormously. From a typical twelve hour cooling time (after a 9 hour firing)... my firing times jumped to 16 hours of firing and over 24 hours of cooling. Within a few months, my firing times extended into days instead of hours. Cooling times extended sometimes for three or more days.

One of the effects of this radically slow cooling was that the fluid glazes had ample time to recrystallize and form fascinating geological formations. Some of these crystals were so spectacular. Other times, the glazes made the most simple, almost boring, flat shields of matte crystal formations. In this platter, you can see the crystal patterns formed over a fluid glaze underneath. What I initially hoped for is almost impossible to describe. I wanted snowflakes of peach floating on a blue watery field. Due to the extended cooling time, the titanium that was seeding the glaze solution spread and formed thick icy sheets of titania crystals. Looking back at this platter, I wish I had been able to experiment more with this style of glaze. So many opportunities, right under the skin. 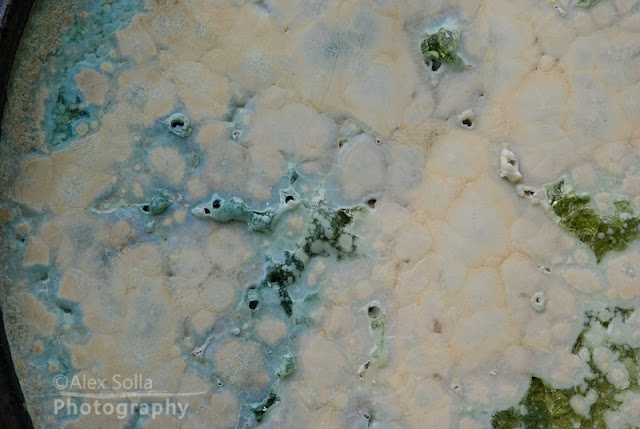 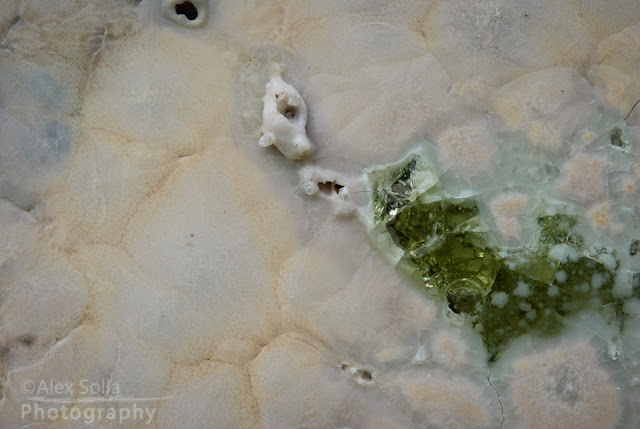 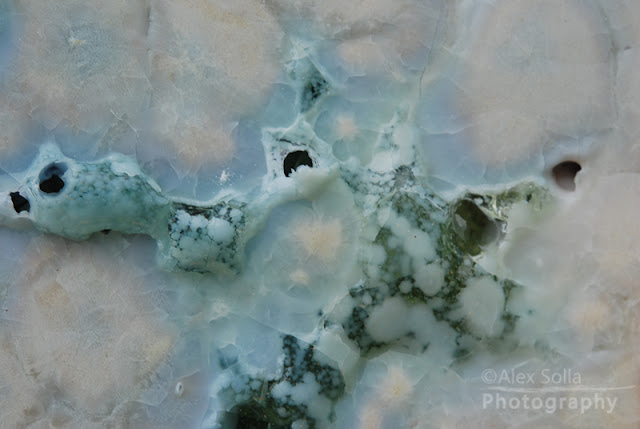 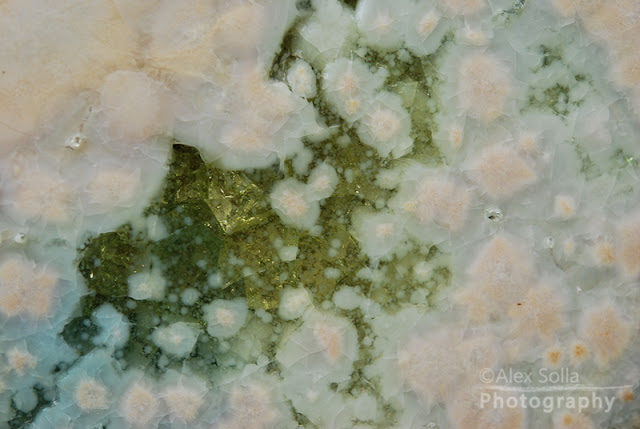 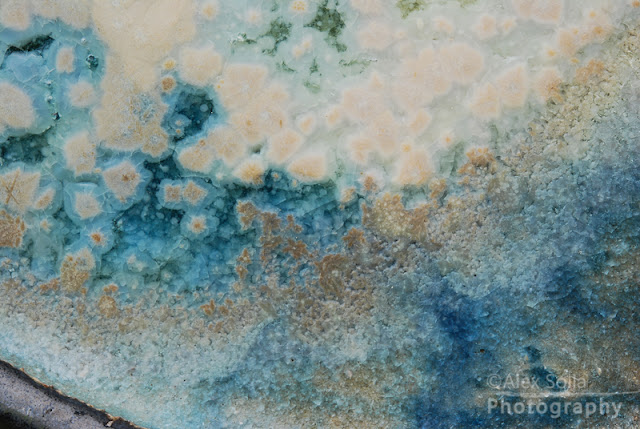 Dried Up Toothpaste, in Bed (from Glaze Tectonics) 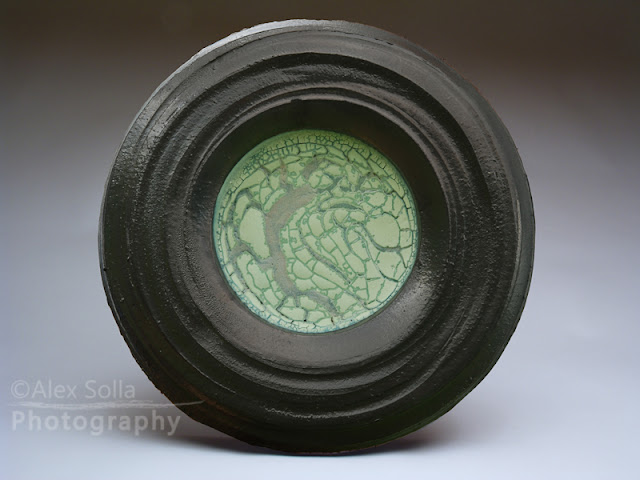 This was another one of those massively wide-lipped platters. Because that rim is actually hollow, it is one of the lighter platters I made. Probably only 15" in diameter, it is a good five pounds lighter than a platter of a "normal" rim.The inside of this platter was originally supposed to be bright fire-engine red...and crunchy! I think in my hurry to get things ready for this firing, I cut back on my thoroughness in the glaze lab, and didn't mix this glaze as thoroughly as was needed. My guess is that the lead frit in this glaze simple settled in the slurry.In the end, it is certainly not what I expected, but it also has intriguing aspects. And it does really resemble dried up toothpaste, in bed. 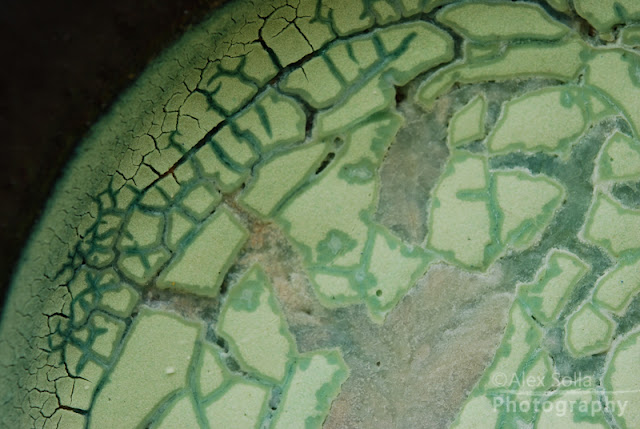 Like what you're seeing here? Check out GLAZE TECTONICS. All platters, all the time. More images, more details, and lots more information about the making of this body of work. 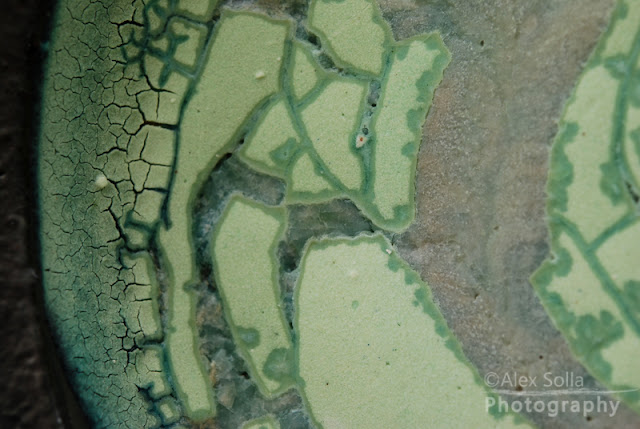 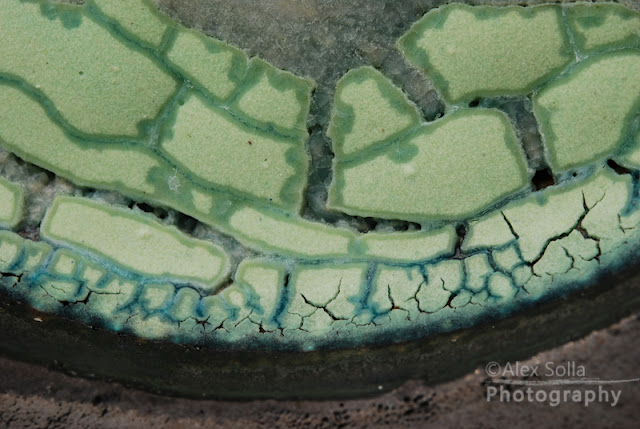 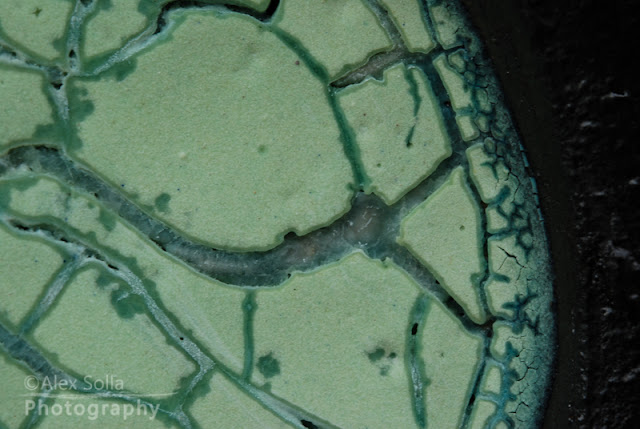 An Important Note to ALL of our Customers

In 2009, I underwent a surgery that went awry. The resulting peritonitis, infection and coma left me with a host of major medical problems. As of August 22, 2010, the pottery studio is CLOSED. We are no longer making, packing or selling pottery.

I will be posting new images of other potter's pottery, as well as images of pots from our collection and some of my platters from the Glaze Tectonics series on this blog on an occasional basis. For more interesting day to day blogging, please check out the new PHOTOGRAPHY BLOG